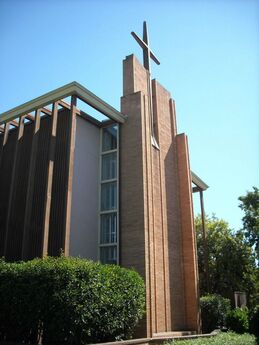 In 1897 a small group of Christians in Palo Alto met for prayer and fellowship -- the beginning of a journey of faith by a Congregational community. Palo Alto had been incorporated just three years earlier, and this fellowship of Stanford professors, businessmen, merchants, and their families longed for a church similar to the Congregational churches they had left on the east coast. Their vision was to form a community of faith with strong local autonomy.

On October 29, 1900, with a charter membership of 52 and a Sunday school of 50, the First Congregational Church of Palo Alto officially organized. Membership doubled in the first year, and church leaders quickly realized the need for a permanent building. The brown shingled church they built at the corner of Hamilton and Waverly had a capacity nearly twice that of any church or hall in Palo Alto. Dedicated in 1905, the building survived the 1906 earthquake and became the central relief center for the peninsula. The church's tradition of strong service to the community became firmly established.

During World Wars I and II church life suffered from the loss of many leaders who served overseas. Vitality and membership were low. But in the decades following each of the wars a remarkable resurgence occurred. It was during this last growth spurt in the community and church that members voted to build a larger building at Embarcadero and Louis Road. Construction lasted from 1953 to 1961, during which time the church continued to grow vigorously.

By the early 1960's both membership and church enrollment exceeded 900. The congregation and staff responded to the needs of this large community with energy, creativity, and innovation. Members established a weekday nursery school, and the church added staff to reach out to college students, youth, and the larger community. The church buildings were occupied 7 days a week with these groups as well as adult education and a thriving music program. And, as always, the church offered inspiring and meaningful times of worship.

The church has carried on these traditions to the present day, and the facility has undergone changes to meet the needs of a changing congregation. In 2007, the Sanctuary was renovated to comply with ADA codes, improve acoustical qualities, including a new Letourneau pipe organ.

In the fall of 2014, the congregation embarked upon an additional campaign to upgrade the campus. Projects included: landscape redesign, seismic retrofitting of sanctuary, social hall and kitchen renovation, roof replacement including solar panels, education wing refurbishment.

The Process of Our Church

The ultimate authority in our church is vested within the Congregation, meeting a number of times each year to make decisions that come in front of the assembly. In between those meetings the Church Council and the five Boards -- Deacons, Education, Outreach, Trustees, and Worship -- serve as the congregational meeting ad interim. Representatives from each of the boards along with the officers of the church (Moderator, Vice Moderator, Treasurer, Clerk), and a few others, make up the Church Council. The pastors of the congregation serve on the Council with voice but no vote. Generally, we make decisions by consensus, choosing to follow what we discern to be the bold movement of the Holy Spirit in our place.

“Congregational” means a type of church organization, not affiliation. We are a congregational church because of our process, though affiliated freely with the United Church of Christ denomination. (Two of the three other types of church organization do often share their name with those church’s wider affiliation -- i.e. Presbyterian, Episcopal. The remaining type is connectional.)

Our process requires the involvement, at some level, of every member and friend of our church. This is a type of engaged practice where everyone has a stake in the outcome. For those who like a determined, streamlined method -- congregational process may very much be troubling. But for those who want to actively participate in the governance of their faith community, who want to be involved in decision-making as big as facility construction or pastoral employment (or as small as individual budget line items for office supplies), congregational polity may be the organization you’ve been dreaming of.
To review our church by-laws go to this link

Click here to view the Agenda for  Congregational Meeting