Begun with the inspiration and hard work of many church members, the garden is filled with flowering plants, many of which are native to this region of California.  A variety of bees and butterflies now thrive here, and the soil is teeming with life as the garden has become a biodiversity hotspot. 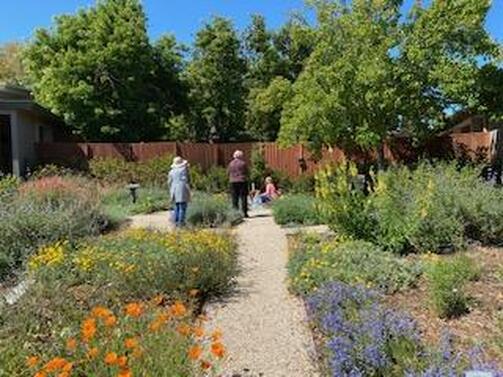 This was the first gathering place in early 2022 for an Indigenous and Non-Indigenous conversation at our church, when Dr.Jonathan Cordero of the Association of Ramaytush Ohlone met with a small group from the Ohlone Justice Project (renamed BANAP).
​Indigenous people of this area find a connection with, give thanks for, and make use of many of the plant species found in the garden, including Yarrow (Achillea), Mountain Lilac (Ceanothus), Soap Plant (Chlorogalum pomeridianum), Yerba Buena (Clinopodium), Coneflower Cantaloupe (Echinacea), Brittlebush (Encelia californica), Buckwheat (Eriogonum), California Fescue (Festuca), Oregon Gumweed (Grindelia), Silver Bush Lupine (Lupinus), Coyote Mint (Monardella), Sage (Salvia), California Figwort (Scrophularia), and Blue Eyed Grass (Sisyrinchium).

The Ramaytush Ohlone Land Trust (ROLT) is the official land trust of the Ramaytush Ohlone peoples of the San Francisco Peninsula. The primary goal of the ROLT is to acquire or gain access to or co-manage lands within our ancestral homeland for the following purposes:
1) Stewardship: to restore the health of the land;
2) Service: to work with the land in service of others; and
3) Cultural Revitalization: to reanimate our traditions and ceremonies.

Note: The Association of Ramaytush Ohlone (ARO) is working with the following partners: San Pedro Point (with Coastal Conservancy and the City of Pacifica), Filoli, Golden Gate Park (with Recreation and Parks Dept of San Francisco), Peninsula Open Space Trust (POST) and Midpeninsula Regional Open Space District (MidPen), Black Point (with the National Park Service and the American Indian Cultural District (AICD))
Bay Nature: “Land Back; Indigenous land repatriation is much discussed and little practiced in the Bay Area. Why is it hard to return stolen land?”  (Jan. 2021)
​
Braiding Sweetgrass: Indigenous Wisdom, Scientific Knowledge and the Teachings of Plants by Robin Wall Kimmerer

Green Foothills (Mission: To protect the open spaces, farmlands, and natural resources of San Mateo and Santa Clara Counties for the benefit of all through advocacy, education, and grassroots action.) information about their partnership with Amah Mutsun to protect Juristac.

​KQED: “Meet 3 Women Behind Indigenous Land Back Effort to Reclaim SF Peninsula Farm”; Learn about a farm in San Gregorio and the three indigenous women working to reclaim it to “heal the wounds of colonialism through food, medicine, story, and restoration.” (4-23-22) 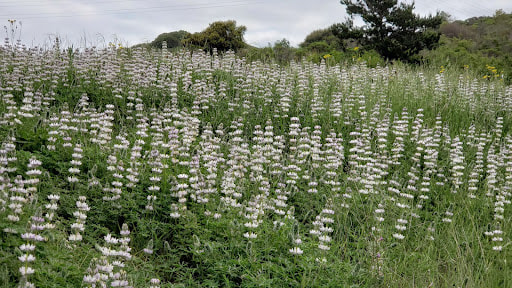 ​POST: Protecting Open Space for the benefit of all: Description of general hikes and upcoming guided hikes

Sempervirens Fund: “The true riches of relationships with the land” and information about their relationship with the Amah Mutsun Tribal band and their land trust. (Jan. 2021)

Tending the Wild; Native American Knowledge and the Management of California’s Natural Resources; By Kat Anderson. 2013