Iyanu Olukotun, 16, of Stanford, walks his dog Orion in Foothills Park on Dec. 18, the day after it opened to all members of the public. Photo by Kim Bomar

Iyanu Olukotun, 16, of Stanford, has been an avid birdwatcher for the last five years. While he says it’s possible to observe birds just by walking down the sidewalk or searching on the way to school, he prefers to watch them with binoculars or a camera at local parks. One park, however, was inaccessible to him because it barred non-Palo Alto folks from entering unless accompanied by a Palo Alto resident: the 1,400 acre Foothills Park.

“A huge thing I was missing out on was exploring Foothills Park,” Olukotun said. “It’s a giant natural area with many different species of water and land creatures.”

But Olukoton and his mother Kimberly Bomar were two of 10 plaintiffs in a successful lawsuit against the city of Palo Alto. After being filed on September 15, a 5-2 City Council vote on November 16 opened the park to the public. Councilmembers Greg Tanaka and Lydia Kou voted against the measure, and Kou even tried to gather the minimum 2,580 signatures on a referendum petition to overturn the decision, but was only able to obtain 1,200 signatures by December 16.

“A lot of the people who voted to keep it closed were thinking about me, me, me,” Olukotun said. “It’s going to be too busy for me. It’s going to be too crowded for me. I would encourage them to think about the millions of other people who are being deprived of this 1,400 acre park. I would recommend, as cliche as it sounds, that they put themselves in other people’s shoes.”

As of December 17, the park is open to all, though due to COVID-19 protocols there’s a 750 max capacity for the first 90 days and all visitors must be masked and socially distant. Olukotun said he’s happy that the park was filled to capacity on December 24 because it means people are using the beautiful space.

Olukotun’s involvement in the suit originated from his passion for birding. Bomar had helped him get connected with her former Stanford Law Professor Thomas Grey, who she knew was also an avid birder and notable photographer, having had his photos displayed by the National Audubon Society. Grey was acquainted with retired Superior Court Judge LaDoris Cordell, who got the ACLU involved and led the charge to overturn this 55-year-old policy that the organization says is a "vestige of a well-documented history of racial discrimination."
“The park was originally closed in the 60s, so I think it’s rooted in not only elitism but [also] racism, because it was closed in an area where redlining was prevalent,” Olukotun said. “It was basically ‘us’ and ‘them,’ and we don’t want ‘them’ over here.”

Ultimately, Olukotun and Bomar say this is another example of overcoming systemic racism.

“Misinformation appeals to people who don’t want to see this as a racial issue or as an exclusion issue, but see it only as a fairness issue,” Bomar said. “That fairness issue is fallacious. It’s just not true. People should educate themselves on the actual issues and then decide.”

Bomar recommends people read the complaint to understand the history of how this exclusive park came to be.

“There’s a lot of misinformation floating around; number one of which is that Palo Alto paid for the park and everyone else refused,” Bomar said. “That’s just not true. Santa Clara offered to pay half a million dollars and Palo Alto refused it because the strings attached meant it would’ve had to be opened to the public.”

A second misconception, according to Bomar, is that two other local towns, Los Altos Hills and Portola Valley, didn’t contribute to the park.

“[Portola Valley] didn’t even exist yet; it hadn’t even been incorporated yet,” Bomar said. “And [Los Altos Hills] was brand new and there was no way that they would’ve been able to rally in time to do a referendum.”

When Judge Cordell was seeking plaintiffs, Professor Grey mentioned Olukotun. Joining the lawsuit was not without risk. Bomar said it was right around the time that John Lewis passed away and New York Times published his editorial “Together, You Can Redeem the Soul of Our Nation” reminding citizens of the importance of his philosophy of getting into “good trouble, necessary trouble” to make change.

Bomar was a little worried about her son experiencing personal attacks on social media platforms like NextDoor or that her involvement in the suit would negatively impact the small, solo law practice she’s building, but decided to take Lewis’ advice to heart.

“I don’t think you can get into good trouble without it being a little costly,” Bomar said. “There’s risk to these things.”

Olukutun says the disparaging comments from naysayers he read on Palo Alto Weekly articles and on NextDoor were discouraging.

“The biggest challenge was probably coming to terms with the reception for public acceptance,” Olukutun said. “I can’t say I stopped reading the comments, because I didn’t. I was interested in them. The way I overcame it was basically just by witnessing the progress. Despite this group of people, the park is still open. That shows a great deal of progress.”

Palo Alto Mayor Adrian Fine was also in favor of opening the park to all.

“It's 2020 and I'm really glad Palo Alto could make this move,” Fine is quoted saying in NBC Bay Area News. “I'm sorry it took us a lawsuit to get here." 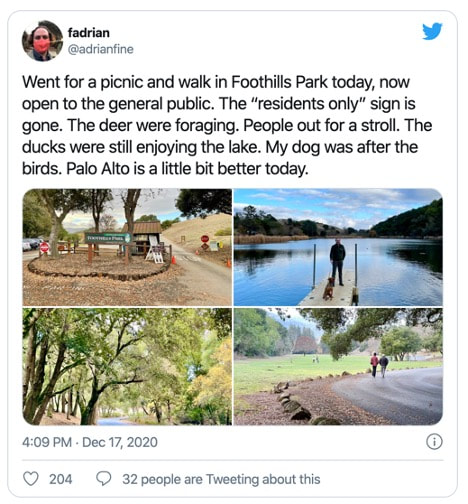 Throughout the process, Olukotun says he experienced what it takes to stand up to an injustice.

“I’ve learned that there will always be people opposed to causes, and if you focus on them too much and discourage yourself, that’s never a good thing,” Olukotun said. “Which I did because I was constantly reading comments on articles, which usually were not aligned with my own beliefs, but all they cause is anger.”

While Bomar is discouraged by comments rooted in racism, she has felt supported by her community, including members of the Peace and Justice Task Force at the First Congregational Church of Palo Alto.

“I love our church. It’s a very progressive church and a very social justice oriented church, so it’s a great fit for our family,” Bomar said. “And a lot of people are already doing this work. The members of our church have really been out there, and really supporting it, and not just because they support my family, but because they support these issues.”

The best way to continue to support all minority communities, according to Bomar, is to call out racist comments.

“When you hear something that’s negative or suspected racial comment, don’t let it slide, because that’s consent,” Bomar said. “Challenge this entitlement — the idea of who’s entitled to the park. When you hear comments suggesting that only certain people are entitled to be in the park, challenge that.”


Additionally, Bomar says she’s in support of those who want to keep the park thriving, but suggests alternative approaches from barring non-Palo Alto residents.

“I am actually very much persuaded by people who wanted the park to remain closed for environmental reasons because I’m a hiker — I love nature,” Bomar said. “The issue is not to keep out your neighbor. The issue is to come up with reasonable regulations to preserve the serenity of the park.”